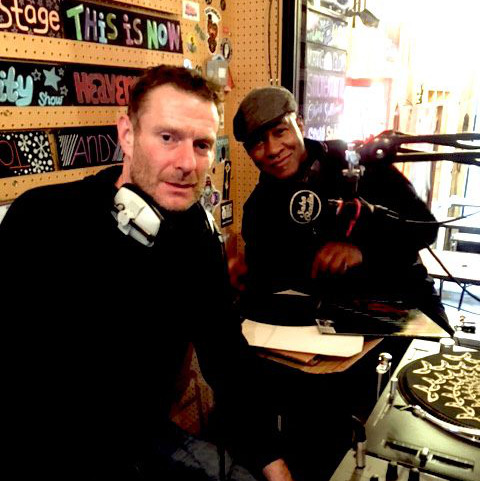 It’s been a year since we published Junior Tomlin‘s phenomenal Flyer & Cover Art book. Ever since we’ve been trying to do a launch party but, for obvious reasons, it’s never happened. Junior’s best-known sleeves are probably for Renegade Soundwave and Junior still remains good friends with RSW’s Danny Briottet to this day. To mark the first anniversary we asked Junior to interview Danny and Danny to do a mix of tunes that Junior did the artwork for (either singles or compilations).

What are your roots? Have you always been a west Londoner?
My dad was French and my mum from the East End. When I was born we lived in a little basement flat of Ladbroke Grove. Eventually, we moved to North Africa, where my parents were working. When we came back we lived around various parts of West London, including Ealing. Where I went to school. Notting Hill / Bayswater always felt like home and I hung around there as a kid until I moved back when I got my first flat, opposite the old Vinyl Solution record shop.

What first got you into music?
It was always there, in the background. I used to love the way the West Indian families around where I lived as a kid would put their speakers outside and the dads would play dominoes and drink Guinness with reggae blasting. Reggae has always been one of the great loves of my life, and by my mid-teens, I was going to sound system clashes around West London. Punk was also a big influence – for the energy and attitude as much as the music.

Who inspired you to make music?
The sound systems – bass was the most important fundamental for me in making music, the young bands that the older kids had at school, the late-night radio, early hip hop DJs like Afrika Bambaataa, Grandmaster Flash, Afrika Islam and Jam Master Jay, David Bowie, Marvin Gaye, The Clash, the German electronic pioneers, the soundtracks of Ennio Morricone, the great reggae producers especially Joe Gibbs and King Tubby, thousands of nights in nightclubs in London, New York and Berlin in the 80s…

It’s been over 30 years since Space Gladiator, have you ever thought of reforming the group to make a track or two?
Been offered all sorts of incentives, but not sure if that would work.

How important was a release’s artwork to you?
The artwork was extremely important. I used to love sitting with you and going through ideas – the stuff you did for us is timeless and still appreciated, as are the sleeves David Little did. I always had a big hand in the design of the sleeves and also the various logos we had. Sadly, this art form is one of the casualties of the digital age.

What is your favourite Renegade Soundwave song?
There’s a few – obviously The Phantom, but also Black Eye Boy, Women Respond To Bass and Transworld Siren off RSW In Dub and a few tracks off The Next Chapter of Dub such as The Man Who Wouldn’t Let Wax Wane and the single Renegade Soundwave, with all its various mixes, including the classic Leftfield remix.

What are you doing these days?
Been doing quite a few remixes this year, working with Rico Conning, who worked on some of the early RSW stuff and was William Orbit’s partner. We’re also working on mixes for my own album, the first for a very long time, which is coming along very nicely and features various cool people like Dan Donovan, Tim Bran, Andrew Innes, Chris Canavaggio, Rico, Aswad. I still DJ but that obviously came to a halt due to the pandemic. Looking forward to getting back out there again. I have an idea for a book, which I’ve started preparing, and will get to when I have time. I’m also Director of Music Programmes for the United Nations’ European Centre for Peace and Development (ECPD).

What are the first three things you’re going to do when we finally get out of lockdown?
There are plenty of things that I’d like to do, but seriously, I’ve kind of got used to this situation and I’m not about to rush out and go mad. I was still going to the studio throughout and working, being productive, so it hasn’t been as bad for people like me as it has for most people. Would like to take the family on holiday, would like to get on planes to go and DJ in mad places again, but I think we have to take it easy for the time being.

What can you tell us about your mix?
The music is from a bunch of releases that you did the artwork for. Was a trip down memory lane and interesting to see how the tracks sounded today. Some of the artists are still out there doing it – LTJ Bukem, Shut Up And Dance… whist some of the tracks sound plain bonkers. There are two parts to the mix – the first half is 120 bpm-ish rave and house stuff, the second half jungle, separated by the only hip hop track, by Gunshot, with a couple of RSW tunes that you did the sleeves for in the first half.

Signature Brew Haggerston
Railway Arch 340, Acton Mews, London, E8 4EA
Harold Heath will be in conversation at Signature Brew Haggerston in London on Thursday 1 July at this free event to launch his new book Long Relationships. After the talk, Harold will also play a special DJ set. You'll also be able to buy signed copies of the book for £12 (cash) or £13 (card) instead of the usual £14.99. All our other titles will also be on sale at special prices.
Read More