Tape Leaders is a richly illustrated A-Z compendium featuring over 100 composers active with tape and electronics in the analogue era. Containing information never previously uncovered, it shines a fresh light on many sound experimenters unacknowledged in the history of British electronic music. First published by Sound On Sound Magazine in 2016, this is the first time it’s been available outside their shop.

Tape Leaders is available as a hardback and the 224 pages are printed and bound on heavyweight 130gsm paper. The specially compiled 15 track CD of mainly unreleased early British tape and synthesizer works is exclusive to the Velocity Press shop. Please note that postage & packing is charged separately.

In the form of a richly illustrated compendium, Tape Leaders: A Compendium Of Early British Electronic Music Composers is an indispensable reference guide for anyone interested in electronic sound and its origins in the UK. For the first time, a book sets out information on practically everyone active with experimental electronics and tape recording across the country to reveal the untold stories and hidden history of early British electronic music.

With an individual entry for each composer, it covers everyone from famous names like William Burroughs, Brian Eno and Joe Meek to the ultra-obscure such as Roy Cooper, Donald Henshilwood and Edgar Vetter. There are sections for EMS and the BBC Radiophonic Workshop and amateurs, groups and ensembles that experimented with electronics, including The Beatles, Hawkwind and White Noise. Author Ian Helliwell draws on his experience and extensive research into electronic music. After six years and dozens of interviews, he has amassed information never before brought to light on this fascinating subject.

Included with the book is a specially compiled 15 track CD of mainly unreleased early British tape and synthesizer works (exclusively available to the Velocity Press shop), making this an essential book for anyone interested in electronic music history during the 1950s and 60s.

“Until now, the Radiophonic Workshop has somewhat eclipsed other players in British early electronic music history. The extent of this is laid bare in the revelatory book Tape Leaders – a landmark survey by the composer, film-maker, instrument-builder and researcher Ian Helliwell, who has uncovered hitherto unacknowledged independent electronic music composers.” Fortean Times

“For anyone with an interest in the early years of electronic music, Ian Helliwell’s book takes the reader on an enthralling tour of the pioneering British contributors to this genre.” Sound On Sound

“The work of computer music pioneer Peter Zinovieff, home-build guru FC Judd, UFO-believer and Spitfire pilot Desmond Leslie, and Tristram Cary – have all been reissued. Ian Helliwell’s new book, Tape Leaders, A Compendium of Early British Electronic Music Composers, goes further. It reveals that these figures collectively represent the tip of a hitherto unimaginably vast iceberg submerged for decades. Profiling dozens of composers, amateur and professional, and augmented by a 15 track CD of electronic music… it truly is a portal into a lost world.” Shindig 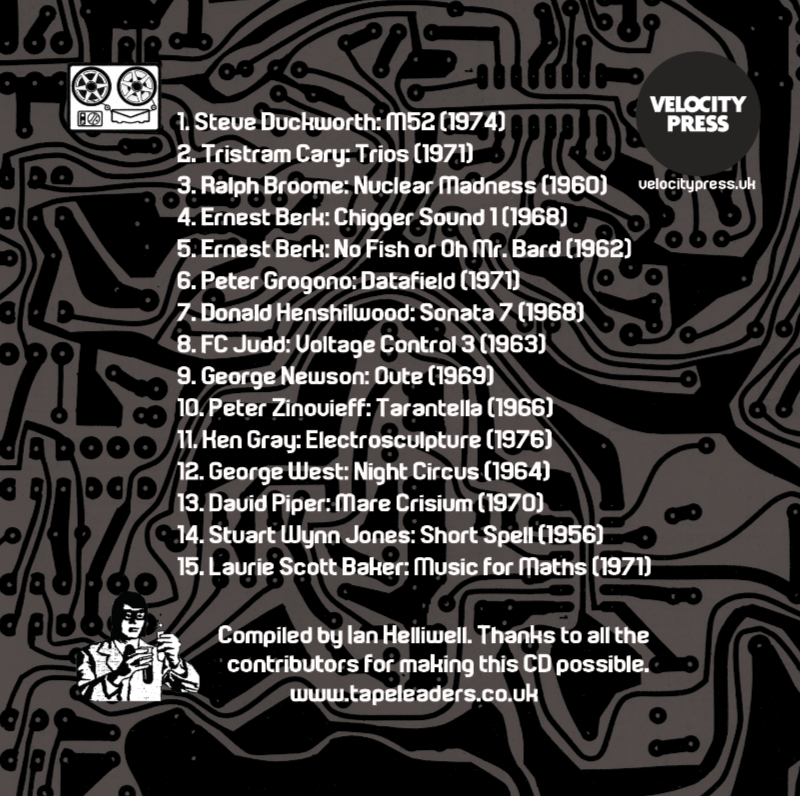 Be the first to review “Tape Leaders” Cancel reply