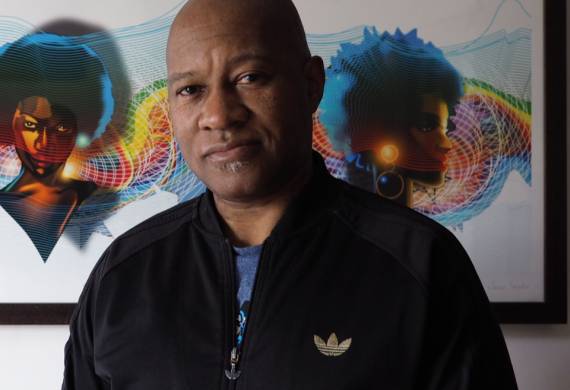 Junior Tomlin was born and raised in Ladbroke Grove, west London. He excelled in art from an early age, copying comic books with precision and flair, also creating accurate copies as gifts for school friends.

Renowned for his stunning flyer and record cover art, mostly produced during the golden era of rave culture, Junior’s visionary work combines influences from sci-fi, surrealism, fantasy, futurism and comics. The result is a collection of artwork that defined an era and earned him the title ‘The Salvador Dali of Rave’.

He worked with a range of seminal rave promoters from 1989 onwards including Telepathy, Dreamscape, Slammin’ Vinyl, One Nation, Dream Odyssey and Ravealation, plus a wide variety of influential labels, such as Kickin’ Records, React, ZTT and Mute.

Throughout the nineties Junior’s work commanded the attention of thousands of ravers, providing the perfect visual accompaniment to what was a revolutionary new movement. Junior was also a colourist on a variety of famous comic titles including Judge Dredd and Action Man, working for Marvel, Panini, Titian, 2000AD and DC Comics.