Please note that for the paperback that postage is charged separately. There is no postage charge for the ebook option which will be delivered in three formats: pdf, mobi and epub. 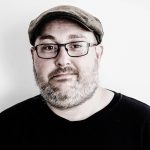 Since the dawn of the 1990s, British dance music has been in thrall to the seductive power of weighty sub-bass. It is a key ingredient in a string of British-pioneered genres, including hardcore, jungle, drum & bass, dubstep, UK garage and grime.

A mixture of social, cultural, musical and oral history, Join The Future reveals the untold stories of bleep’s Yorkshire pioneers and those that came in their wake, moving from electro all-dayers and dub soundsystem clashes of the mid-1980s to the birth of hardcore and jungle in London and the South East.

Along the way, you’ll find first-hand accounts of key clubs and raves, biographies of forgotten and overlooked production pioneers, stories of bleep outposts in Canada and the United States, and the inside story of the early years of one of electronic music’s most iconic labels, Warp Records.

Based on five years of research and hundreds of hours of new interviews, the book is a radical alternative history of the rise of British dance music during the late 80s and early 90s.

Join The Future is also available as a compilation album.

“This was a vital creative era in British electronic music that deserved deeper exploration, so Matt Anniss’ history of ‘bleep and bass’, which sets the sound in the socio-political environment of its time, is a significant addition to the literature of dance culture.”
Matthew Collin, author of ‘Altered State’ and ‘Rave On’

“You wouldn’t have had hardcore had it not been for bleep. If you took bleep out of the equation, Britsh dance music would be completely different.”
Mark Archer, Altern8

“Bleep provided the building blocks of the UK sound that followed – the emotions, the edge, the darkness and the sub-bass. Later generations have taken these elements and done something new, but the fundamentals are still there.”
Neil Landstrumm

“Since bleep, there’s always been a heavy bassline thing coming from Sheffield and Leeds. Look at what’s come later, with bassline, the Niche sound and Toddla T. From one generation to the next, it’s always been about bass.”
Luca Lozano