The Secret DJ returns with the follow-up to their acclaimed debut book. Less a sequel and more a panoramic wide-angle painting of the biggest youth movement in human history, The Secret DJ: Book Two charts the rise of dance music over the last 30 years and its connection to western capitalism and culture. It will be in the shops on 4 December 2020 but pre-order it now and you’ll receive it first in November and with your name in the book.

Please note that for the paperback that postage is charged separately. There is no postage charge for the ebook option which will be delivered in three formats: pdf, mobi and epub. 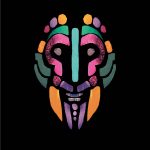 The Secret DJ has been a professional DJ from 1985 and a touring headliner since 1997. The Secret DJ has written and produced many successful records and remixes and has also played in several bands. They co-founded and helped run the UK’s first independent commercial radio network, bringing electronic dance music across the entire nation for the first time.

The Secret DJ continues to perform around the world and is currently the sole resident DJ and co-promoter for one of the world’s biggest clubs. The Secret DJ writes a popular column for clubbing bible Mixmag and contributes to several other magazines on the subjects of music, film and politics.

The Secret DJ is an EU national and splits life and work between the UK and Ibiza.

The Secret DJ returns with the follow-up to their acclaimed debut book. Less a sequel and more a panoramic wide-angle painting of the biggest youth movement in human history, The Secret DJ: Book Two charts the rise of dance music over the last 30 years and its connection to western capitalism and culture.

While never claiming to be instrumental, The Secret DJ was around for every stage of the journey and is a continually wry observer of this unstoppable growth. The Secret DJ’s signature humour and wit are ever-present in this ascent, charting personal ups and downs as well as the buying and selling of the acid house revolution.

“No one in publishing would have the balls to touch this book with a bargepole,” says the Secret DJ. “It takes courage to speak up. There’s not much in the way of reward for telling it like it is, not any more. If you expose an industry, that industry hates you for life with the intensity of the sun. I have nothing but admiration for Velocity Press, they’ve taken a big risk working with me. I appreciate it greatly. It’s good to know there are still people out there willing to stand up.”

Praise for the Secret DJ…

“I loved The Secret DJ – some all-too-familiar characters mixed with the highs and lows of what this industry can throw at you. Excited and intrigued to read the second instalment… how much more extreme can it get?!” – Denney

“I never read books about electronic music, why would I? But I guess The Secret DJ is more an anarchist handbook for shattered dreamers than a manual on how to make it big on the scene. Can’t wait for his new adventures.” – Ivan Smagghe

“We all have war stories, us jobbing night-lifers. From having sets ended by soldiers with automatic weapons in Juarez to coming-round in Glasgow city centre suddenly best pals with a gangster who’s most affectionate nickname was ‘Wolf’. I’ve bagged a couple over the years. And yours are undoubtedly more vivid, funnier or more ludicrous than mine. The Secret DJ’s are better still.” – Ewan Pearson

“The Secret DJ’s first book managed to do something very different to the existing dance music memoirs (and I should know as I have read them all). It functioned not only as a hilarious jaunt through the insanity of the glory years of dance music – i.e. when there was still money in music – but as a harrowing portrayal of the emotionally, physically and mentally taxing straits an international DJ will find themselves in. Anyone with even a passing curiosity about ‘the industry’ should read it and await its follow up, especially if they have any frankly dangerous notions of joining up professionally, which I cannot in all good conscience recommend.” – Manu Ekanayake (music and culture journalist)

“It’s rare for a writer to capture the excitement and absurdity of dance music culture at the same time, but the Secret DJ did that to great effect in the first book. This latest chapter in the story promises to be every bit as exhilarating, providing an important critical voice at a time when ‘the society of the spectacle’ threatens to suck the life out of those clinging to the acid house dream.” – Justin Robertson

“The first book is a raw, effective and bizarrely emotional tale of ‘the life’. Superbly true and direct. I can hardly wait to hear the tale of the music movement being told by The Secret DJ in Book Two!” – Miguel Campbell

“The Secret DJ returns to once again pull back the curtain on the world of dance music and the sometimes harsh, but always hilarious, realities of what lurks behind it. Get ready for a second descent into the far(cical) side.” – Neville Watson

“Really enjoyed the first book, both hilarious debauchery and insightful commentary on a world usually kept behind the curtain. I’m looking forward to the next instalment, hoping for a lot more righteous anger within.” – Posthuman

“Every participant in the music industry will wince at the thought of falling under the glance of the Secret DJ’s withering pen, but still find themselves avidly leafing through his pages for the merest mention.” – Carl Puttnam (Cud)

“I once spent a fine and wonky evening at Claridges Hotel with this Secret DJ fellow and a less secret, ultra famous superstar DJ type, who you’d think would be the centre of attention. But no, it was Mr Secret that kept us very amused and highly illuminated with his many tales, theories, and a steady supply of vodka and tonic. If his second book contains a tenth of the wild imaginings and brain expanding possibilities that he told us that night, it’ll be a solid gold winner.” – Richard Norris