Showcasing the mastermind behind some of the most iconic rave flyers and record covers of the late eighties and early nineties, Junior Tomlin: Flyer & Cover Art is a comprehensive insight into Junior Tomlin’s incredible back catalogue. The book will be 25cm x 25cm, printed and bound on premium 130gsm paper with a hardback cover. It is the first time his work has been documented and presented in such a comprehensive, cohesive fashion.

Please note that postage & packing is charged separately. It’s £5 if you live in the UK, £12 for Europe, £25 for USA (thank Donald Trump for it being so expensive) and £18 for the rest of the world. 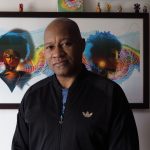 Junior Tomlin was born and raised in Ladbroke Grove, west London. He excelled in art from an early age, copying comic books with precision and flair, also creating accurate copies as gifts for school friends.

Renowned for his stunning flyer and record cover art, mostly produced during the golden era of rave culture, Junior’s visionary work combines influences from sci-fi, surrealism, fantasy, futurism and comics. The result is a collection of artwork that defined an era and earned him the title ‘The Salvador Dali of Rave’.

He worked with a range of seminal rave promoters from 1989 onwards including Telepathy, Dreamscape, Slammin’ Vinyl, One Nation, Dream Odyssey and Ravealation, plus a wide variety of influential labels, such as Kickin’ Records, React, ZTT and Mute.

Throughout the nineties Junior’s work commanded the attention of thousands of ravers, providing the perfect visual accompaniment to what was a revolutionary new movement. Junior was also a colourist on a variety of famous comic titles including Judge Dredd and Action Man, working for Marvel, Panini, Titian, 2000AD and DC Comics.

Showcasing the mastermind behind some of the most iconic rave flyers and record covers of the late eighties and early nineties, Junior Tomlin: Flyer & Cover Art is a comprehensive insight into Junior Tomlin’s incredible back catalogue.

Rave culture transformed the way people experienced music, sparking a revolution in British society and spreading across the globe during the late eighties. Its influence is still being felt today, as millions of people around the world attend clubs and festivals that embody the spirit of rave culture. Intrinsic to the spread of the culture in those pre-internet days was the dissemination of flyers, giving ravers information on where and when their favourite promoters would be organising parties. In order to stand out from the competition, it was imperative that the most respected events had distinctive flyer artwork.

Junior Tomlin’s visionary capabilities led to a long-running career as a flyer artist. His fantastical projections of the future and often surreal imagery earned him the title The Salvador Dali of Rave. Tomlin’s iconic work was highly sought after, with ravers collecting his remarkable work and promoters queuing up to commission him to produce imagery for their flyers. Junior’s imagination conjured up alternate worlds, references to outer space and gave us a peek into the endless possibilities presented by an unknown future. It was the perfect representation of the brave new world being cultivated by rave promoters and the community that sprung up around the culture.

Junior worked with a range of seminal rave promoters from 1992 onwards including Telepathy, Dreamscape, Slammin’ Vinyl, One Nation, Dream Odyssey and Ravealation. 30 years since he designed his first flyer Junior Tomlin: Flyer & Cover Art documents his work across 160 pages, with commentary and draft sketches provided by Junior himself. Divided into two distinct sections – Record Covers and Flyers – the book also features an in-depth interview with Junior and a foreword by Chelsea Louise Berlin (artist, flyer collector and author of Rave Art) plus words from former clients.

Chronicling the work of a pioneering artist whose art was intrinsic to early rave culture, Junior Tomlin: Flyer & Cover Art marks a critical time in British history. In a time where division and conflict seem to be more prevalent than ever, the book allows us to escape into Junior’s fantasy worlds and travel back in time to an era when social barriers were being broken down.

The book is 25cm x 25cm, printed on premium 130gsm full-colour paper. It is the first time his work has been documented and presented in such a comprehensive, cohesive fashion.

“When I think of music and the concept of what I wish to express, I always want the visual representation to be in total synergy with that I am creating. Artwork is so important! This is why I did not hesitate when it came to choosing an artist and legend like Junior for specific work projects I had in mind.”
DJ Rap