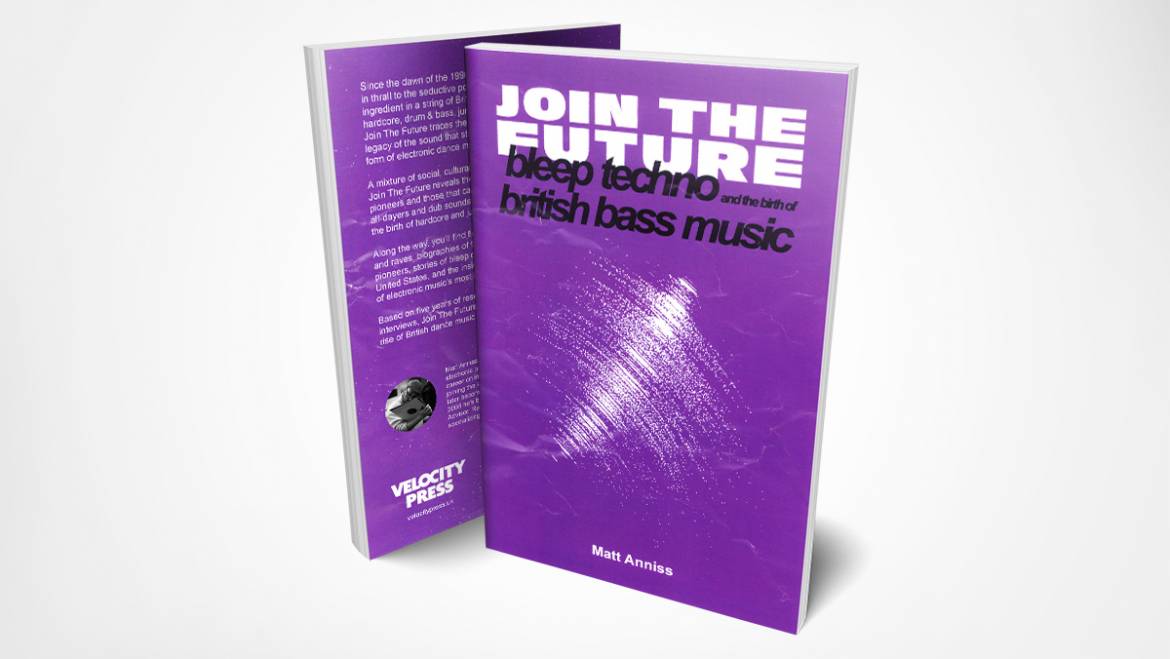 Join The Future by Matt Anniss is our first book, due out in December 2019. Here the author explains how it has been almost ten years in the making…

I’d like to tell you that the story of Join The Future began with an epiphany or at least some kind of profound revelation. In fact, it started with an argument in a club way back in the autumn of 2010.

I was deep in discussion with a group of young DJs about the roots of “bass music” – a collective term for that cluster of interconnected sub-genres of sub-bass heavy dance music – and offered the opinion that most of the music they played could be traced back to a short-lived style variously referred to as “Yorkshire Bleep”, “Bleep Techno” and “Bleep and Bass”.

They had never heard of “Bleep”, so I briefly explained what it was: a sparse, weighty style of heavy club music that drew influences from Detroit techno, Chicago house, electro and “steppas” style dub reggae. It was pioneered by bedroom producers and DJs in Bradford, Leeds and Sheffield, inspired the launch of Warp Records (a label that turns 30 this summer, fact fans) and should be considered the first distinctly British form of dance music.

They still looked unconvinced so I offered to prove my point by delivering a DJ mix for their Internet radio station (the now long departed Hivemind.fm) that joined the dots between original bleep classics and contemporary club cuts. I did just that, providing a 500-word justification for my supposedly contentious view of bleep’s significance to run alongside it. (Sadly, neither mix nor article is still online, but this more recent bleep and bass mix by yours truly should give you an idea.)

Four years and untold club conversations along the same lines followed before I decided it might be time to look deeper into the bleeps in a professional capacity. To scratch the itch further, I tracked down some of the sound’s better-known pioneers – or at least the ones who were willing to talk to me – and asked current DJs to talk about the sound’s significance to them.

The result was a chunky 2014 piece for Resident Advisor and a headful of ideas. I knew that there was a seriously good story here waiting to be told, ideally via a book, a compilation album or both. A few calls were made to contacts in the music industry, but the idea was eventually put on hold as life took over.

That the idea was eventually resurrected is down to three young graphic designers from Leeds. In January 2016, they sent me an email headed “Bleep book”. At the time, Kieran Walsh, Harry O’Brien and Jake Simmonds were final year students at Leeds College of Art.

They were all interested in bleep, had read my Resident Advisor article and wanted to create a book about it as their final assessed project. Somewhat cheekily, they wondered whether I’d be prepared to write said book, which they’d design and publish as a run of one book (yes, a single copy).

Most journalists would have told them to sling their hook, but I saw it as an opportunity to kick-start a project that had increasingly been infiltrating my thoughts. I agreed to work with them and provide a short book’s worth of copy with one caveat: once we’d got their show book out of the way we’d work together to publish an expanded, fully realized edition – either via a publisher or, at a push, ourselves.

The kick up the backside provided by an insanely short deadline – I had just over three months to research and write the book – helped sharpen my focus. Somehow I hit that deadline and in June 2016 found myself staring at our one-off book, now titled ‘Join The Future’ in tribute to the Tuff Little Unit record of the same name, in an art gallery.

It was a great moment but I knew it was just the start: if I was going to tell the story of bleep and bass and its role in kick-starting British dance music’s sub-bass revolution, then I’d need to interview a lot more people and do significantly more research.

Over the last three years, I’ve done just that. It’s been exhausting but also hugely rewarding. There’s been a lot of travel up and down the country to meet forgotten producers and overlooked pioneers, multiple trips to the British Library to check out contemporaneous media coverage, and untold hours spent conducting and transcribing phone interviews. I’ve been able to locate people whose remarkable stories had previously never been told (see my piece on original LFO member Martin Williams AKA DJ Martin for RBMA Daily), develop friendships with some of the key players and – most thrillingly for someone who is basically a hardcore music nerd – hear a clutch of unreleased tracks produced during the period.

Most importantly, I feel like I’ve scratched below the surface and dug deep enough to not only tell the story of bleep and bass, but a wider musical and cultural movement born not in London or Manchester – the two cities most discussed in UK dance music literature – but in basements, bedrooms and record shops in Yorkshire and the North Midlands.

For me, this feels important; not so much the book itself, but rather documenting a forgotten but essential and part of British dance music’s early evolution. There’s a very particular often-repeated narrative about the way the UK’s acid house revolution took place.

Most who were there will tell you that what we’ve been told is only a fraction of the story and based on half-truths and myths. I thought it was about time that some of those myths were challenged, as well as the idea that bleep was some kind of offshoot of hardcore (in fact, the earliest bleep records were made and released a year before their hardcore counterparts).

As a result, Join The Future is a radical rewriting of British dance music history that focuses not on what we’ve been told, but rather what we haven’t. I’m delighted that Colin Steven has snapped it up and will publish it as Velocity Press’s first title later in the year.

It’s a genuine labour of love that has consumed much of my working and personal life for the best part of five years. While Join The Future is primarily about the music and the people who made it, it’s also about communities, social change and post-industrial Britain at the tail end of the Thatcher era. 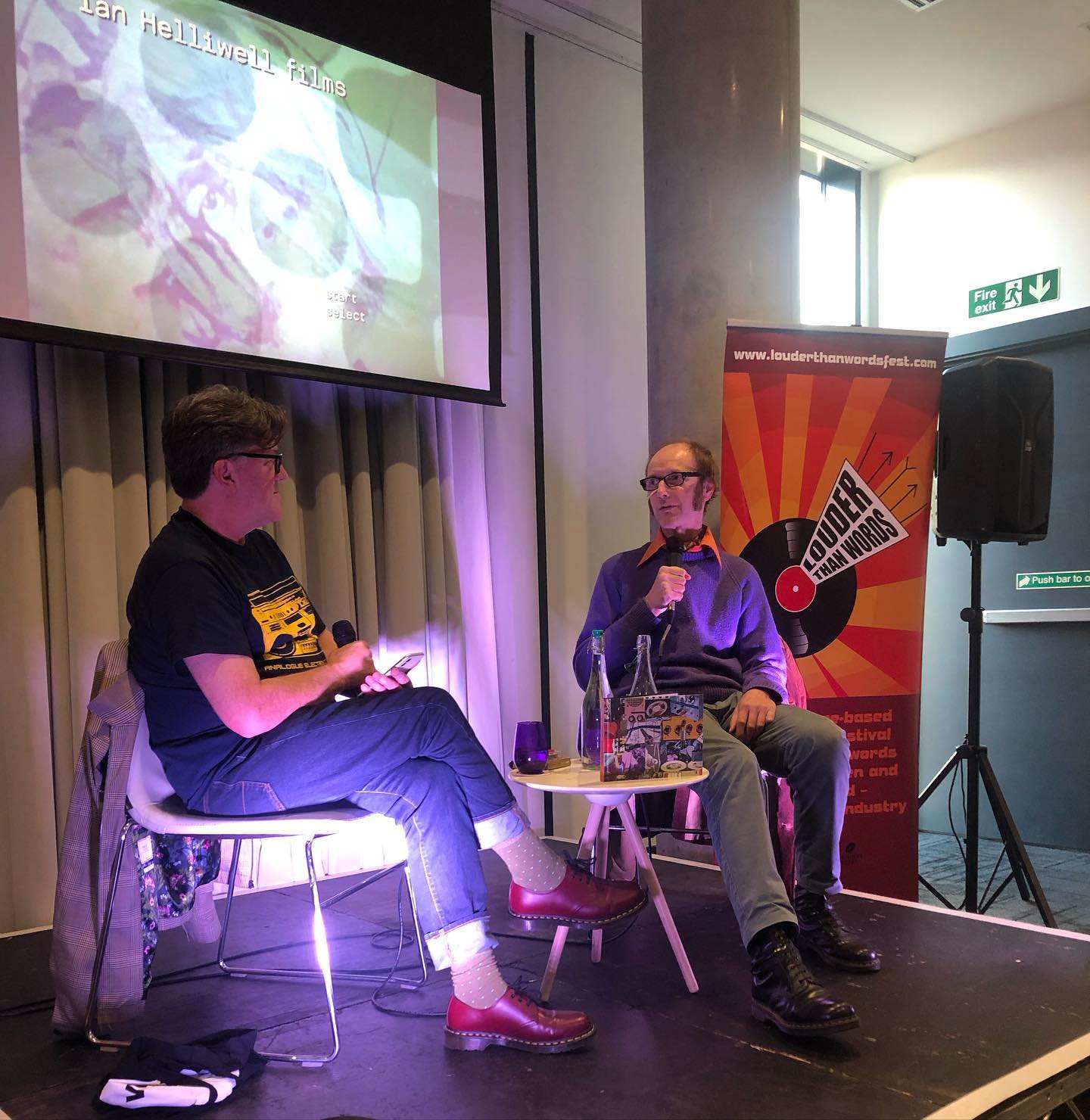 velocitypress
•
Follow
What a great way to start a Saturday! Thanks to @louderthanwordsfest for hosting our Tape Leaders launch party. If you’re in Manchester today come along to Innside hotel where we have a stall selling books at 20% off cover price. #tapeleaders #tapeleadersbook #ianhelliwell #velocitypress #bookstagram #louderthanwords #musiqueconcrete #booklaunch #martinjames
View on Instagram |
1/9 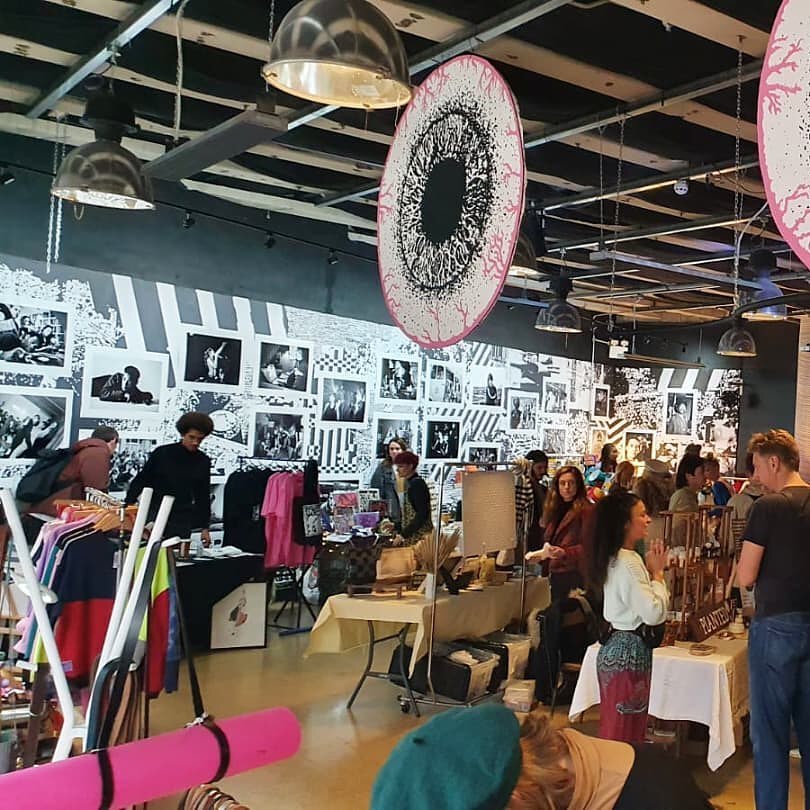 velocitypress
•
Follow
Looking forward to Creators Market at Strange Brew in Bristol on Saturday November 6. We’ll be selling all our wares at reduced prices from noon. Join The Future author Matt Annis aka @sellbydave will be joining us to sign books from 3pm. Come along and say hello if you’re in the area! #velocitypress #strangebrewbristol #creatorsmarketbristol #jointhefuture #mattanniss #bristol #books #bookstagram
View on Instagram |
2/9 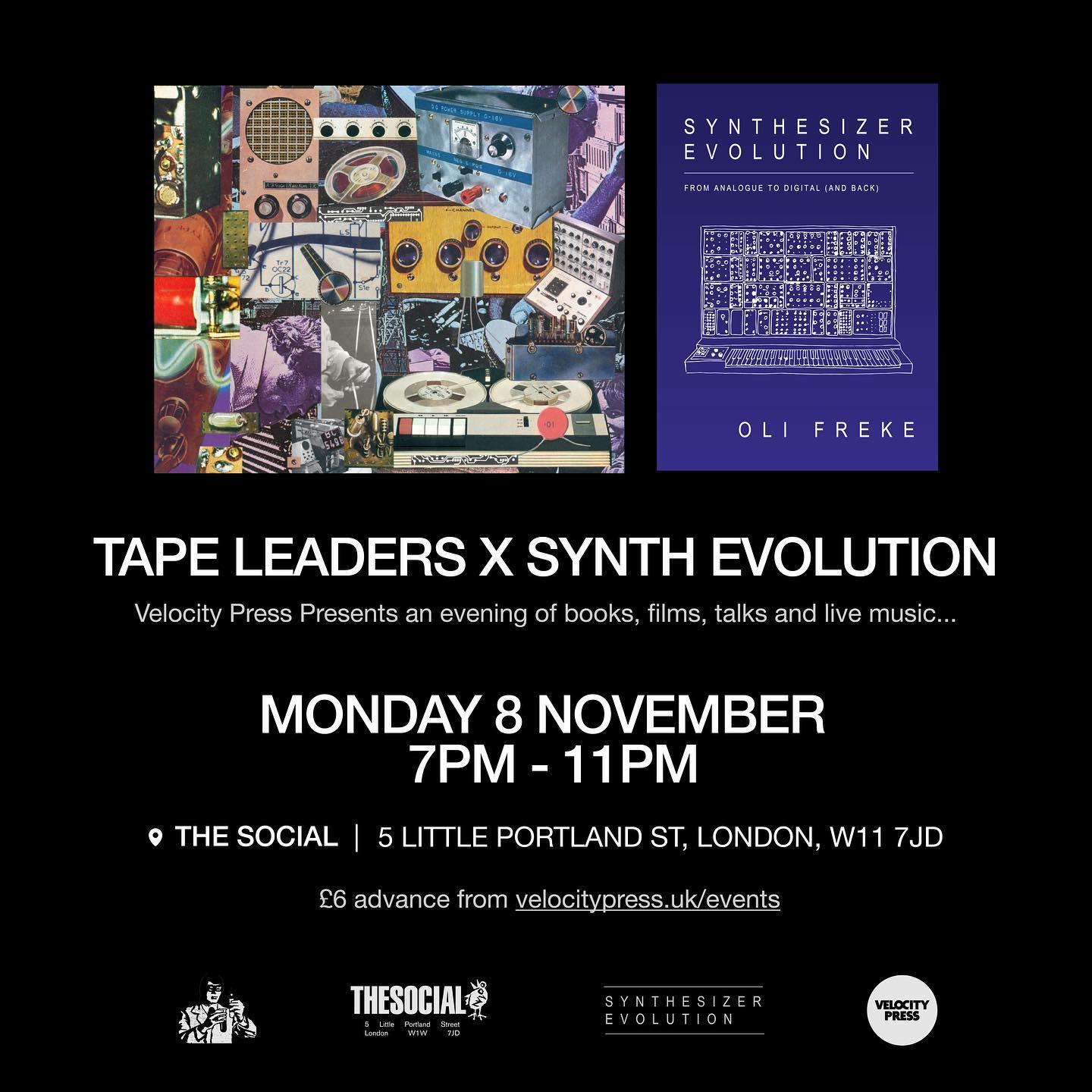 velocitypress
•
Follow
Celebrating the launch of Tape Leaders and the first anniversary of Synth Evolution, we present an evening of books, films, talks and live music at The Social on 8 November. Doors open at 7 pm and for the first hour you can hear the Tape Leaders compilation that features 15 tracks of mainly unreleased early British tape and synthesizer works. Tape Leaders author Ian Helliwell has a back catalogue of over 150 short films, and at 8 pm he'll show a selection of them that highlight his use of electronic music. The content of his films includes abstraction, direct animation, found footage, collage and documentary - all of which will be seen in this programme. At 9 pm Ian Helliwell will be in conversation with Synthesizer Evolution author Oli Freke. Oli will then close the night by performing a live techno set blending his collection of vintage synths with modern modular equipment to create an evolving mix of electronic beats, bleeps and melodies. Tickets are only £6.75 in advance from velocitypress.uk/events #tapeleadersbook #synth #musiqueconcrete #synthevolution #synthevolutionbook #velocitypress #olifreke #ianhelliwell #thesocial #book #synthesizer #booklaunch #event #shortfilm #london
View on Instagram |
3/9

velocitypress
•
Follow
Thanks to everyone who came to our Junior Tomlin exhibition on Saturday. It was a great day and so glad we finally got to do an event worthy of such a good book! #juniortomlin #art #artexhibition #velocitypress #rave #raveart #flyerart
View on Instagram |
4/9 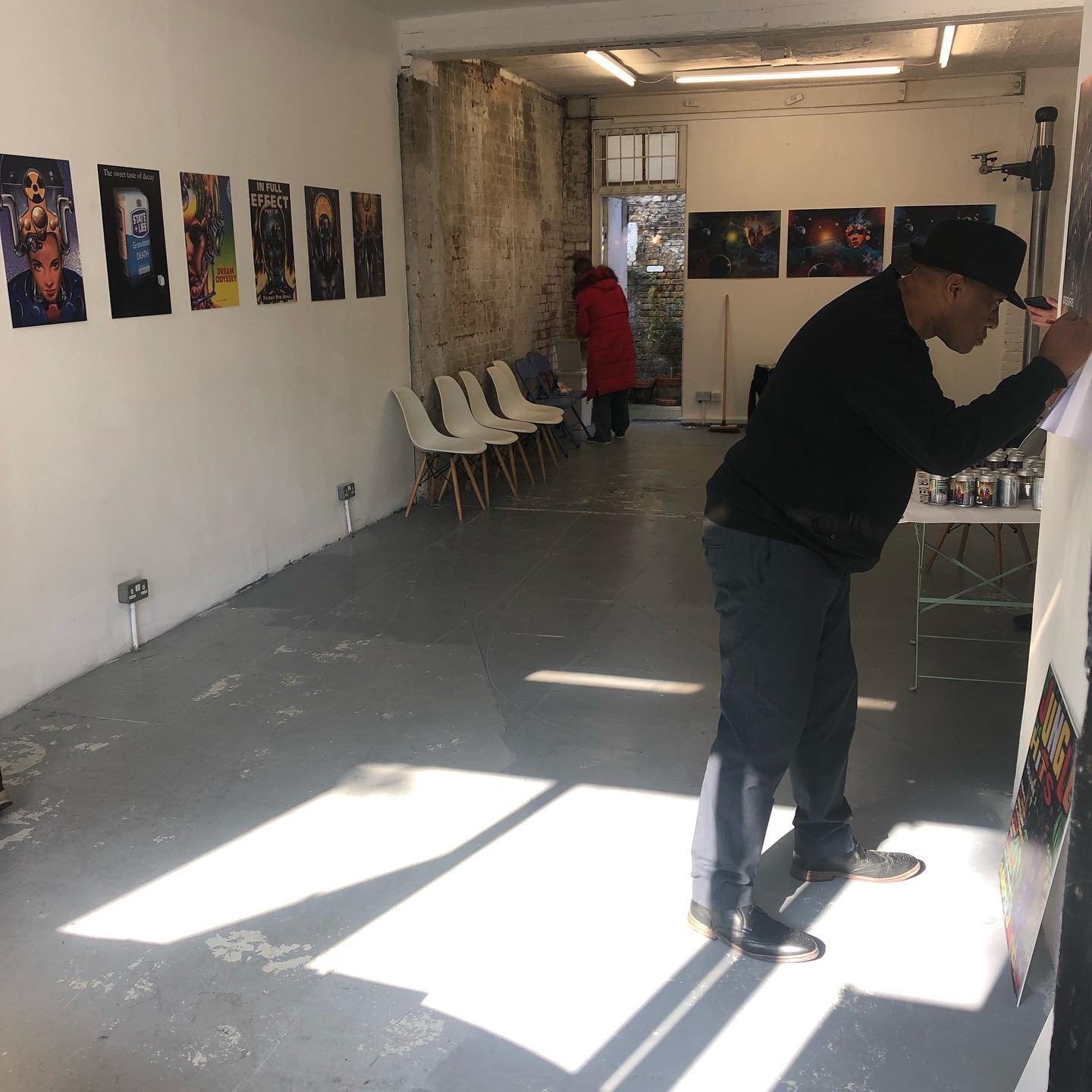 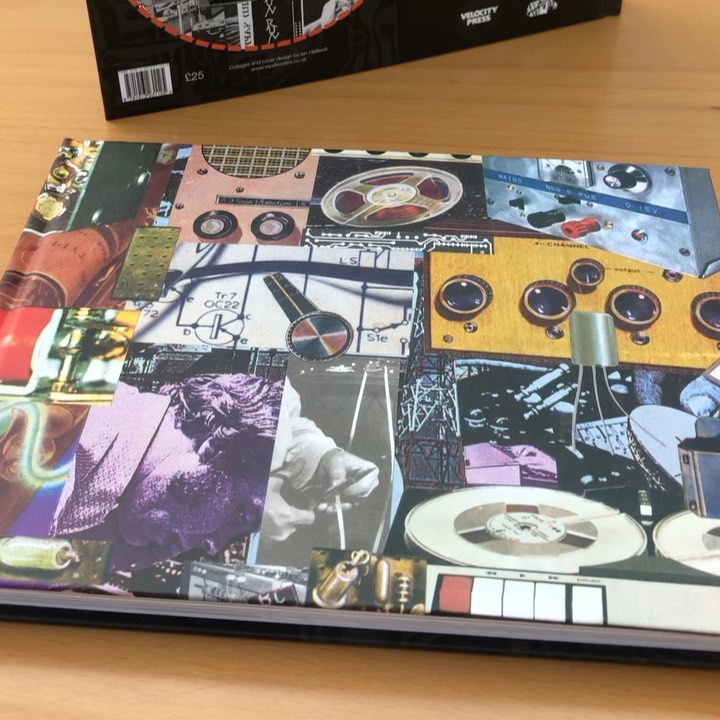 velocitypress
•
Follow
Our latest book, Tape Leaders: A Compendium Of Early British Electronic Music Composers, is an indispensable reference guide for anyone interested in electronic sound and its origins in the UK. For the first time, a book sets out information on practically everyone active with experimental electronics and tape recording across the country to reveal the untold stories and hidden history of early British electronic music. With an individual entry for each composer, it covers everyone from famous names like William Burroughs, Brian Eno and Joe Meek to the ultra-obscure such as Roy Cooper, Donald Henshilwood and Edgar Vetter. There are sections for EMS and the BBC Radiophonic Workshop and amateurs, groups and ensembles that experimented with electronics, including The Beatles, Hawkwind and White Noise. Author Ian Helliwell draws on his experience and extensive research into electronic music. After six years and dozens of interviews, he has amassed information never before brought to light on this fascinating subject. With a specially compiled 15 track CD of mainly unreleased early British tape and synthesizer works (exclusively available to the Velocity Press shop), this is an essential book for anyone interested in electronic music history during the 1950s and 60s. This hardback book is 22.7cm x 17.7cm, and the 224 pages are printed and bound on heavyweight 130gsm paper. Get your copy at velocitypress.uk #tapeleaders #tapeleadersbook #ianhelliwell #velocitypress #musiqueconcrete #electronicmusic #electronicmusichistory #book #books #synthesizer #bbcradiophonicworkshop #deliaderbyshire #fcjudd #hawkwind #hardback #bookstagram #taperecording #experimentalmusic
View on Instagram |
6/9

velocitypress
•
Follow
What a great night last Thursday for the Trip City London launch party at House Of St Barnabas in Soho. Thanks to everyone who made it along especially @msmirandasawyer for keeping Trevor and Gerald on track during the interview and to Sean Mclusky for organising the fabulous venue. We go again this Thursday (September 9) for the Manchester launch event at the offices of @reformradio . It’s invite only but catch @trevor.miller.writer.director and @aguycalledgerald being interviewed by @dj_paulette1 live on reformradio.co.uk from 8pm #tripcity #aguycalledgerald #trevormiller #velocitypress #bookstagram #book #houseofstbarnabas #mirandasawyer #electronicmusic #booklaunch
View on Instagram |
7/9 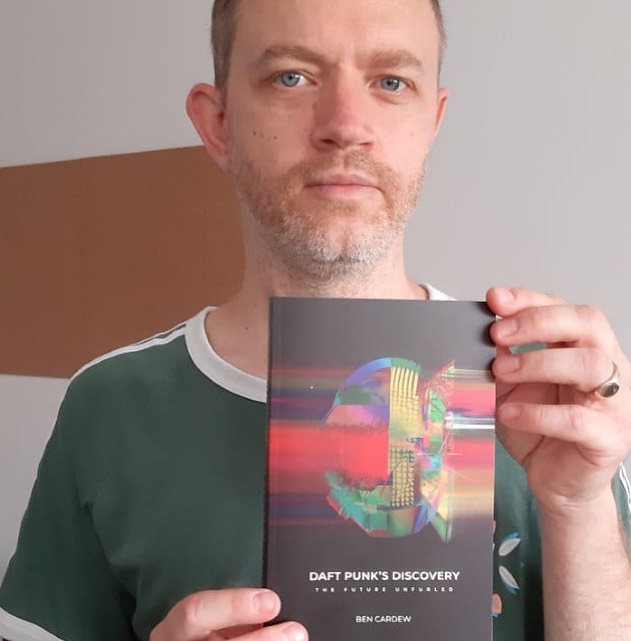 velocitypress
•
Follow
He might not look it but Ben Cardew is smiling on the inside at the publication of his debut book Daft Punk’s Discovery: The Future Unfurled! The book is a homage to a fascinating, troubled beast of an album that casts a huge shadow over the 21st Century. It's a global view of Discovery as a cultural phenomenon, placing the album at the centre of celebrity culture, fan clubs, video, the music business etc., while also examining its profound musical impact. It’s exclusively available now from velocitypress.uk until 3 September when it goes on general sale. #daftpunk #velocitypress #bencardew #daftpunkbook #daftpunkdiscovery #electronicmusic #housemusic #dance #getlucky #onemoretime #edm #daftpunkhelmet #book #bookstagram #books #bookworm #reading #read #booklover #bookpromo
View on Instagram |
9/9
View on Instagram