Bedroom Beats & B-sides is the first comprehensive history of the instrumental hip-hop and electronic scenes and a truly global look at a thirty-year period of modern music culture based on a decade of research and travel across Europe, North America, and Japan.

Please note that postage is charged separately for the paperback. There is no postage charge for the ebook option which will be delivered in three formats: pdf, mobi and epub. 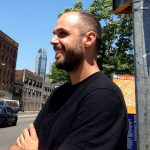 Laurent Fintoni has written about music and culture since the early 2000s. He began his career writing about the turntablist, hip-hop and drum & bass scenes and throughout the 2010s was a regular contributor to FACT, The FADER, Bandcamp and the Red Bull Music Academy Daily among others. He has also worked as a tour manager, label manager and A&R for various independent labels and artists worldwide.

His first book, Bedroom Beats and B-Sides, is the result of more than ten years of research and work, beginning with a series of articles in 2008, a mix in 2009, and a series of talks in 2011. Born in France, he has lived in London, Tokyo, Brussels, Milan, and New York City and currently resides in Los Angeles where he is most likely driving around looking for food.

The first decades of the 21st century saw dramatic changes in the music industry as new technology transformed creation, communication, and consumption. Amid this turmoil one change occurred relatively quietly, almost naturally: so-called bedroom producers, music makers raised on hip-hop and electronic music, went from anonymous, often unseen creators to artists in their own right.

In Bedroom Beats & B-sides: Instrumental Hip Hop & Electronic Music at the Turn of the Century, Laurent Fintoni details the rise of a new generation of bedroom producers at the turn of the century through the stories of various instrumental hip-hop and electronic music scenes. From trip-hop, jungle, illbient, and IDM in the 1990s to just “beats” in the late 2000s, the book explores how these scenes acted as incubators for new ideas about composition and performance that are now taken for granted.

Combining social, cultural, and musical history with extensive research, the book tells the B-side stories of hip-hop and electronic music from the 1990s to the 2010s and explores the evolution of a modern beat culture from local scenes to a global community via the diverse groups of fringe idealists who made it happen and the external forces that shaped their efforts.

Bedroom Beats & B-sides is the first comprehensive history of the instrumental hip-hop and electronic scenes and a truly global look at a thirty-year period of modern music culture based on a decade of research and travel across Europe, North America, and Japan.

Laurent Fintoni says: “This book is a deeply personal project that has consumed me for over 20 years. I hope it can do some justice to the vibrancy and importance of the culture it seeks to celebrate and its people. I am grateful to Velocity Press for taking a chance on me as a first-time author and giving me space and support to tell the first, but hopefully not the last, version of this story.”

“Laurent Fintoni has created an epic tome of information. It’s one of the best examples of connecting the dots between many facets of electronic music. He writes similar to a DJ seamlessly transitioning from one point to the other, with visual vigour. Not since Kwodo Eshun’s More Brilliant Than The Sun, has someone delved this deep between the beats.”
King Britt

“As hip-hop has erupted over four decades to become the dominant genre of the 2020s, this work casts essential analysis on an influential set of producers who rose from obscurity to influence pop culture. It’s a story of changes in music technology and musical education, but crucially of how a small set of outsiders sought to hack, adapt, and break their technology in pursuit of making something expressive and new. In appropriation of tech and genre, the beat scene is a worthy analogue to consider a culture facing the failures of postmodernism, and the opportunities of a new age in media.”
Dominic Flannigan (LuckyMe)

“Finally a deep dive into one of the more interesting new musical trajectories of the modern era.”
Sam Valenti IV (Ghostly)

“The music industry was caught looking the other way, head in the sand, handing out golden parachutes. In the used bins we would marvel at their trash, what they couldn’t sink their teeth into, upcycling it in our way.”
Daedelus (Brainfeeder)